“…Are you worried and distressed?
Can’t seem to get no rest?
Put our product to the test
You’ll feel just fine
Nooooow
Buy a big bright green pleasure machine”

Sometimes it seems like certain conditions are destined to go on forever. Without conscious awareness, we move around with the faintest of creases on our foreheads, as though an ugly hum filled our head. “Will it never end?” we ask ourselves. And then almost without noticing, what ever it it was disappears quietly and unknowingly, our faces relax. This may be the experience of many Trimley residents today, for  over the last nine and a half months work on The Bridge has taken place to many unified groans of despair. The Trimley Facebook pages have metaphorically  resounded with anguish, as pile drivers have pounded through the night and Volker Fitzpatrick workmen plied their trade to construct  the new Bridge, thereby replacing five extinguished footpath crossings in one fell swoop. On Monday 2nd September 2019, it was officially all  over and now a new experience awaits us all. The Bridge was declared open  and we are all free to cross it backwards and forwards and backwards again, as frequently as our hearts desire. Joyously, the sound of pile drivers being heard across the land has ceased.

To be truthful, it was almost accidental I succeeded in recording this auspicious event. Caroline Ley, St. Martin’s Parish Clerk, had kept me well informed about the prospect of the Opening, after the vaunted ‘end-of-July’ opening complete with Minister for Trains, failed to materialise. I knew as much as she, in that it was likely to be Monday 2nd September, although the timings were vague. During a chance stop-off yesterday morning to photograph  the dissolution of the Volker Fitzpatrick site, I seized the opportunity to question Mr. Goodey, the Works Manager.

“When will the Bridge open?” I asked, hoping for something but expecting nothing..

“In about ten minutes,” came the reply, “it’s being opened by the Children of the Felixstowe Opportunity Group.”

It was ten to twelve at that point. There was just time enough for me to skedaddle home, collect my camera, notebook and husband and swiftly head off to the Grimston Hall side of the tracks. Three representatives from Suffolk County Council  were waiting at the edge of the field, including Stephen Kerr, the Definitive Map Manager. The children and their Carers, headed by Sharon Iannuzzi, were regally transported by Taxi to the foot of the Bridge. They were flanked by Outriders from Volker Fitzpatrick. Upon the arrival of this prestigious Party and quite  unlike their staid royal counterparts, the V.I.P children bounced out of the cars and bolted enthusiastically to the Base Camp of the Bridge, where the Mounting Block is placed. The was a marked absence of ceremonial ennui and the Children couldn’t wait to head up the ramp at a challenging speed, in order to cut the ribbons.

Yes, ribbons, plural. There was none of your fancy Nancy propriety we find attached to Train Ministers and Royalty. With seven children and four ribbons, there was ample opportunity for the majority to cut (and keep) a ribbon. Notably, the young gentlemen courteously held back to allow their female companions to take charge. But at this stage, one small and essential technical implement was observed to be absent. Given the sophisticated engineering which has gone into producing the crossing it seems almost impossible to imagine anything could go wrong with a ribbon cutting. Well, it did.

Someone, who shall be nameless, forgot the scissors.

But such was the informal good humour of the hour, one of the unknown Outriders jumped into his car and headed back to … I know not where. You will doubtless be pleased to know there was no drumming of heels or disapproving glances on the part of the honoured Guests. Somehow, I doubt if the Minister for Trains would have been so relaxed about this hiccup. Instead, while the V.I.Ps, waited for the scissors they took another opportunity to charge down one of the ramps at a cracking and unbeatable pace, disappearing into the distance with the alacrity of an Olympic sprinter. It’s reasonable to speculate The Minister for Trains  would definitely not have stretched his legs so effectively. It is is also honest to mention none of the adults present attempted to imitate the children. Before the V.I.Ps could extend themselves into  a threatened break for freedom, the Outrider returned with the necessary equipment.   And with the scissors in place, the snipping could begin. 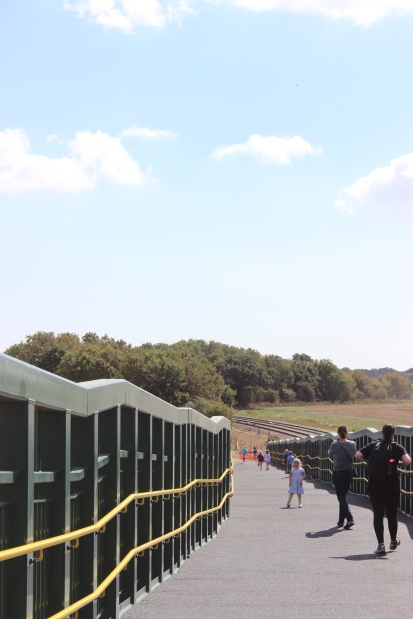 Due to the limited numbers present, the atmosphere was intimate and quite delightful. The children conducted themselves in a spirited manner, amply demonstrating their ability to slice a ribbon, as you may see. 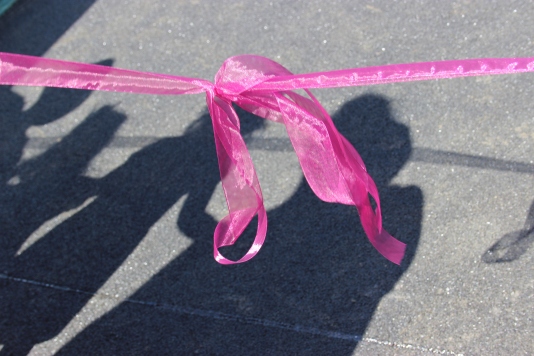 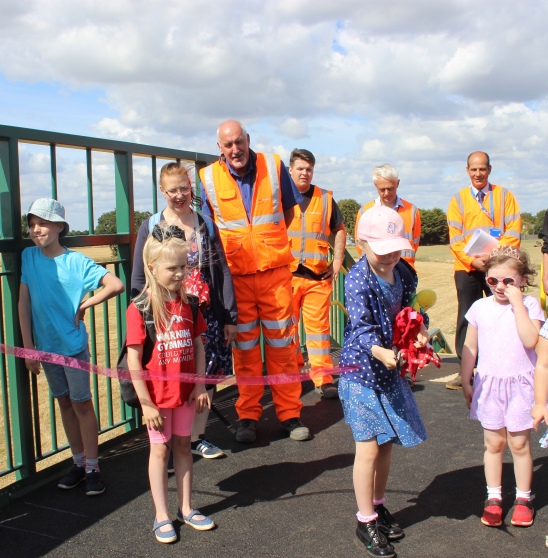 The fourth and final ribbon cutting was held back in order to facilitate a photo opportunity with a passing train. 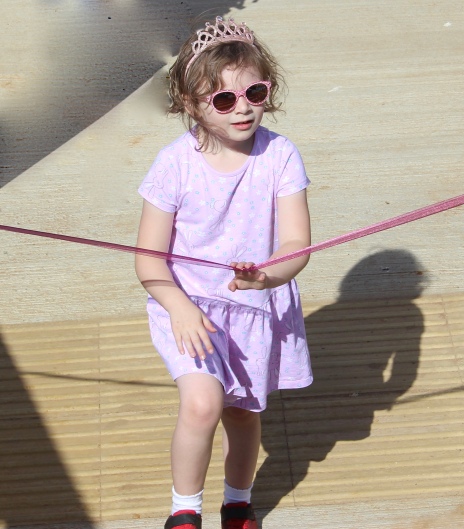 With the final cut, the small but significant ceremony was complete. The Bridge is open, the Works site almost gone and the Volker Engineers will soon be on their way.  Their work here is completed. 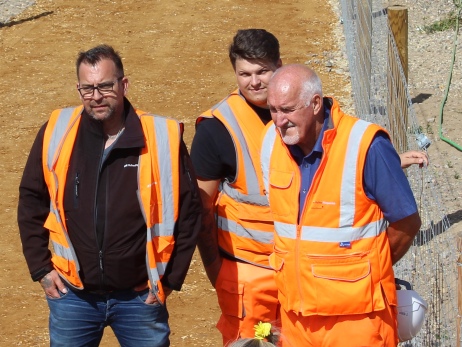 Mr. Goodey, on the left, with other Volker Fitzpatrick workers.

Lee Clifton, the overall Project Manager from the beginning to the end of all the construction work.

Views from the Bridge across rural Trimley St. Martin 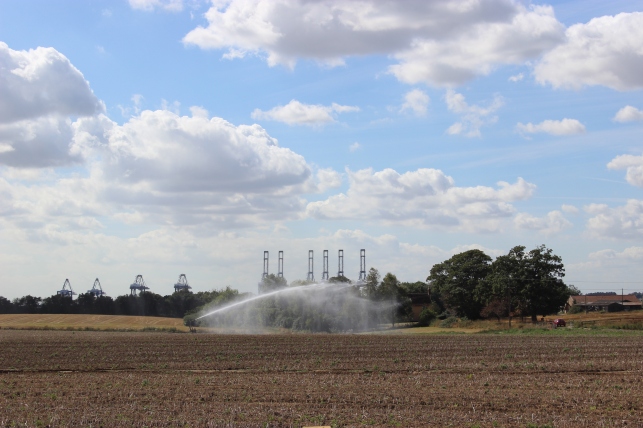 If you have any comments or would like to be part of the Trimley St. Martin project, please contact me at:

8 thoughts on “The Bridge: a big, bright green pleasure machine…”