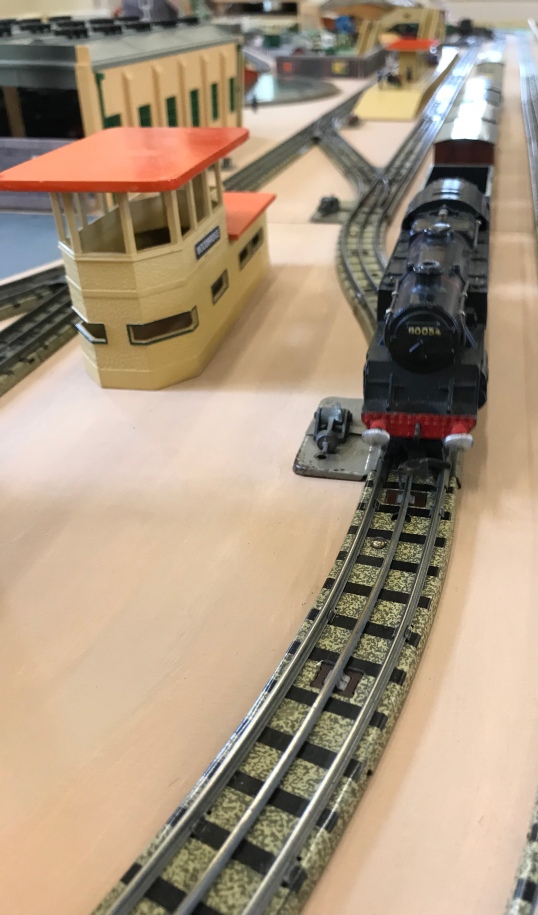 Last Saturday, 27th July 2019, saw the arrival of one of my favourite events in the Trimley Calendar. The Modelling community hit the village with verve and enthusiasm, bringing with them exhibits to make the heart go zing.  With  Adrian Reynolds of ‘Save Trimley Station’ on the entrance, examples of small twentieth century pleasures boldly flaunted themselves with all the pride of ‘The Flying Scotsman’, enabled by the people who know about such matters. They had come from various parts of Suffolk and were proud to present their craftsmanship and expertise to any Trimley inhabitants who delight in model trains.

The buzz created by the model rail enthusiasts was amplified this year by the presence of the Meccano Group, fronted by Roger Upson-Smith. There is much pleasure to be had listening to people who are are committed to sharing their models with others. I travelled around the room delighting in their zestful pursuit and now take the opportunity to share images with you, should you have been unlucky enough not to have been able to attend in person.

The entrance, as stated, was an opportunity for ‘Save Trimley Station’ to sell some of their new merchandise, including a personal favourite, a postcard of Trimley Station by Mark Beasley, whose background boasts cheerfully misappropriated views from the two villages. I miss the ready availability of the postcards of my youth and this new offering is an opportunity to make a small investment for the future. Emails and What’s App just don’t have the same tangibility.

Trimley Postcard by Mark Beasley. Available from ‘Save Trimley Station’

Other chirpy items include a canvas Tote Bag.  Rosemary Gitsham, always a practical supporter of the Charity, kindly presented it to the world.

Rosemary Gitsham displays one of the new pieces of ‘Save Trimley Station’s’ merchandise.

However, the bulk of the show was given over to the train models, starting with a name familiar to everyone born before the nineteen seventies, Triang. This seems appropriate as Triang once claimed to be the largest toy company in the world and took Meccano into its stable during the 1960s. (Meccano started life in 1901 as one of Frank Hornby’s products.)

Triang Railways complete with cardboard models of railway buildings, as it should be.

Felixstowe’s ‘N’ Gauge Society were there with a busy  layout where transport was King.

Other exhibits included  ‘OO’ models. One with an especial appeal is the Ransomes and Rapier Crane. The exhibitor told me he had made the mechanical apparatus himself, “…not very well…”, he said modestly. I lack the technical expertise to argue against him but love the hand crafted mechanism. 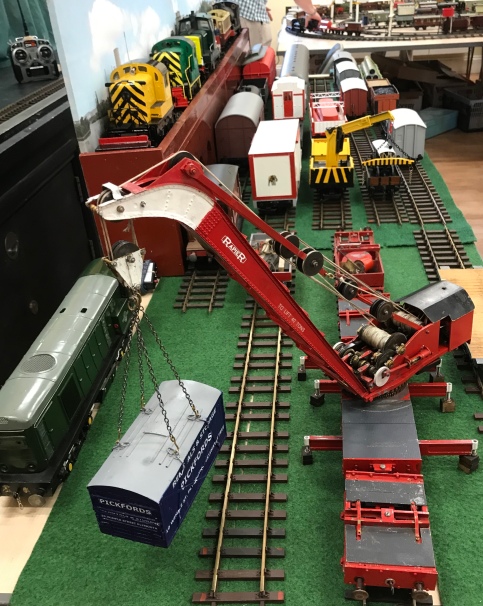 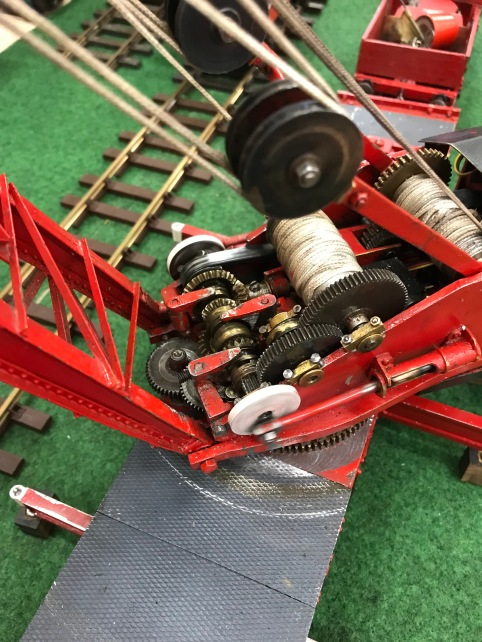 Fine details of a hand crafted Crane with a pulley system.

It was the introduction of Meccano this year which I found immoderately appealing. Denied access to what was perceived as a gender specific toy in my childhood, I found the models captured my attention. Although it is now manufactured in France and China, the specifications haven’t altered and the display on hand showed the versatility of the product. My fingers itched to make something… 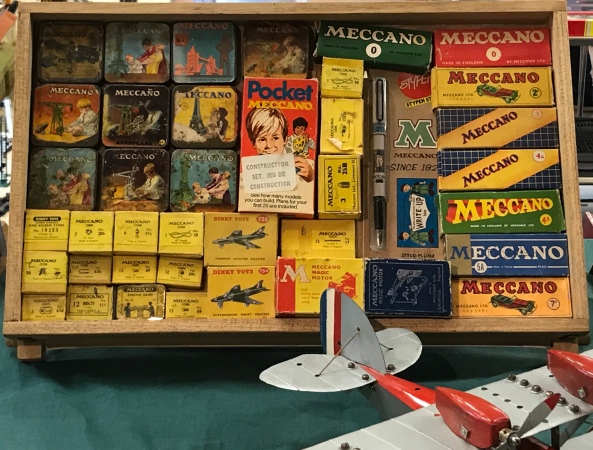 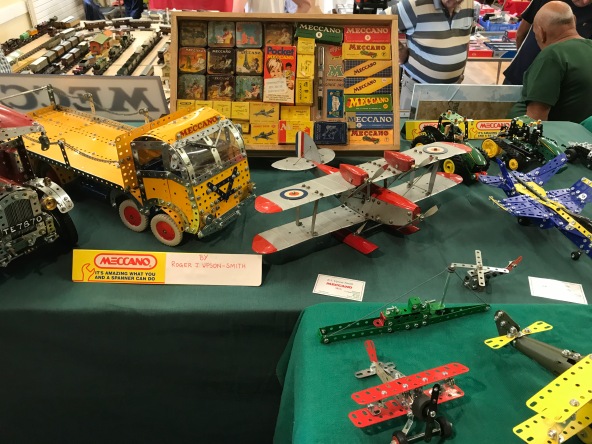 Beyond the Meccano, I could see animated discussions going on across the Memorial Hall. 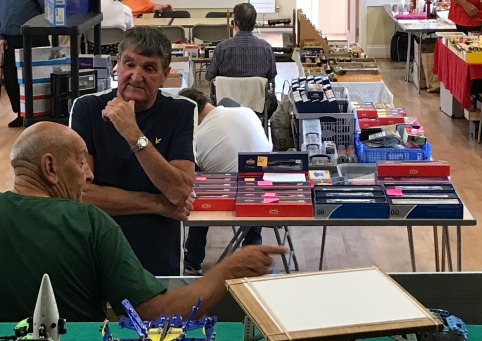 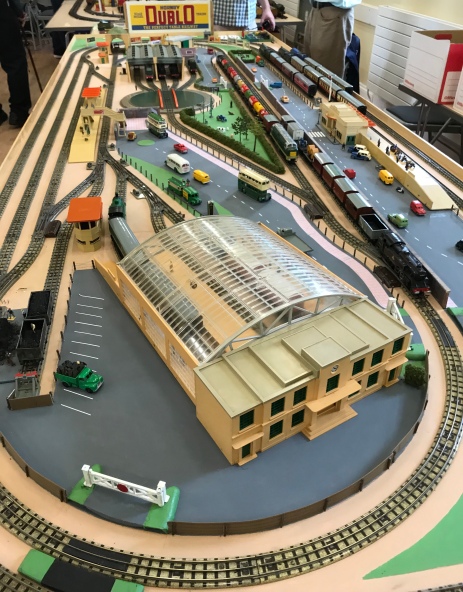 The last exhibit seemed to charge us towards a different countryside. Who would not want to visit TarnFell in all its rugged northern beauty?

If you missed this year’s exhibition, perhaps the above images will push you towards the next appearance. The fantasy landscapes with their perpetual Timetables have a way of speaking to the inner traveller. Perhaps you may feel called to  create a landscape for yourself, if you haven’t done so already. Although way beyond my limited capabilities, the models on display made me yearn to have a layout of my own. But mine would never make it to the Memorial Hall to be displayed, because my personal fantasy is to have an the underground Mail Rail beneath my garden.

If you have any comments or would like to be part of the Trimley St. Martin project, please contact me at: