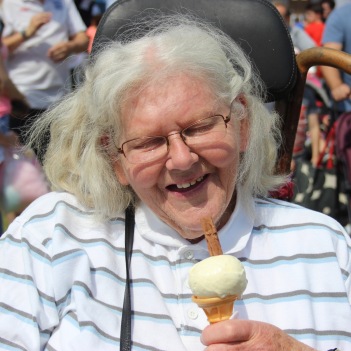 Rosemary Gitsham at the Carnival

It was a bright June day when I visited Rosemary Gitsham, the former Village Recorder for Trimley St. Martin. A cooling breeze was effective in keeping us alert during the hot afternoon hours as Rosemary recounted the happy days of her childhood. Rosemary has known many of St. Martin’s inhabitants over the last 70 or 80 years and I had been eager to interview her about her life and memories for some while, as any conversation with Rosemary quickly demonstrates the breadth of her interests. Her father’s First World War memorabilia was laid out in front of me, including  a German map of the Trenches in 1918 and a German soldier’s papers. This provided some explanation about the curiosity which is one of Rosemary’s hallmarks. Rosemary said both she and her father had a magpie instinct for gathering and keeping items whose worth lay in not in their monetary value but in that which appealed to their interest. In the course of our discussion, it became clear Rosemary is someone for whom the word Serendipity was invented. It is difficult to find any subject in which she isn’t interested.

Born in 1935 when our village was still a small and mostly agricultural community, few houses occupied land along Lower Street as Grimston Lane was then called. Most of the buildings which have taken root along the lane are the product of piecemeal, independent development. Her home is no exception. When her parents moved to St. Martin’s in 1932 they called upon a London architect to design the bungalow in Lower Street, which Rosemary still occupies. A military man for much of his adult life, her father transferred to wherever the R.A.F. placed him, thereby creating a rather transitory life for the young Rosemary. Her life in Trimley began at three weeks old when her mother brought her home from Wimbledon, where she was born. As her father moved about, her mother remained behind in the Trimley family although she didn’t know many people when Rosemary was an infant.  She had to make shift as best she could to amuse herself and the baby. However, with the Second World War approaching, Rosemary and her mother were not to remain in Lower Street for long and in 1938 moved to join Rosemary’s father at Bicester. This exile was followed by a series of moves as a consequence of the demands of the War and eventually, Rosemary found herself in Silloth, on the Solway Firth. By now she was about 5 or 6 years old and it was time to start school and partake of the magic of learning. Having been taught to read by her mother, Rosemary went to school with a significant advantage.

“When it came to reading I remember thinking, ‘I’ve got to get to the bottom of this!’”

And get to the bottom she certainly did. Her early start with books and reading encouraged her desire to know more about just about everything; an enthusiasm for learning which has never left her.  Rosemary always wants to know more as anyone who talks to her will tell you.The short spell in Silloth was followed by a move to Chester, which was to prove fruitful as the school taught French, which Rosemary loved. She had another advantage as she was fortunate enough to live in the same road as Chester Zoo and used to be taken there every Saturday.

“Because we were so close to the Zoo, I would lie awake at night and hear the lions roar.” said Rosemary, “I recall there was a lion in a cage with a dog as a companion. Some years ago, I wrote to Chester Zoo and they confirmed this was the case and I wasn’t making it up!”

This experience was not to be repeated upon her return to Trimley in 1944, when the lions were replaced by slightly less intimidating animals on the smallholding of Messrs. Morgan and Jennings. These two men occupied the land on the corner of Thorpe and Grimston Lane, next to the current Post Box. Rosemary was allowed to visit them regularly to see the chicks in the incubator, a horse called Kitty, a dog called Bill and a nameless pig. Perhaps best of all for any child, she was allowed to have a kitten; when it was very small it would stay at her home on a day release scheme until old enough to leave the mother cat.  Some people might think this was all a child needed but as with us all, school did not go away and Rosemary next went to the progressive Central School in Felixstowe, now called Fairfield Infants. It had not long been de-militarised and only just returned to being simply a school. Rosemary’s class teacher, who was also the Deputy Head, was a Miss Wise, whom Rosemary remembers for her ferocity. Unfortunately, she was never taught by the teacher responsible for the class below; a certain Miss Ransome, whom Rosemary believes was Arthur Ransome’s sister.

By now, Rosemary’s father had returned from military duties for good and took up a position in Hill’s the Jewellers in Felixstowe.  Yet another school move was in the offing for Rosemary.  It seems almost inevitable she was awarded a Scholarship to The Girl’s High School in Ipswich, then as now a fee-paying school. Living in Trimley required a daily bus journey to reach the school, which might have proved a financial burden but,

“I was given a free bus pass every term. Mother used to make me write and say thank you to Mr. Leslie Missen, the County Education Officer. I would catch the Bus to County Hall and then walk up Bolton Lane and Westerfield Road after getting off the bus at Major’s Corner in Ipswich. “

Rosemary loved the school from the moment she entered its doors and recalls being very excited by both the singing and the Physics Lab. No bullying or snobbery was evident and even now she has retained contact with some of the girls; friendships which have lasted over 70 years. Here was a girl who was keen to find out about everything; a gift for any Teacher. Her zest was not confined to school but encompassed learning at home as well. Her father taught her to swim in the Orwell, just off Trimley Shore. In those days families would picnic there, each occupying an area they informally regarded as theirs. Because Rosemary and her family were newcomers, they sat at the far end of the shore, closer to Trimley marshes. The cliffs nearby were a source of wonder, containing fossilised shells, shark’s teeth and other prehistoric remains. The foreshore offered many curiosities; on one occasion Rosemary found a Roman bottle on the beach, which she has retained to this day; on another, hats which had fallen from Ganges Boys heads who were based in Shotley. Did she keep them?

“No! We threw them back in the water, they were too muddy!”

Everything was a source of fascination and everything was embraced with delighted exuberance. Perhaps the highlight of her young life came when Rosemary was 13. Her mother had been left a small legacy and chose to take herself and her daughter to Canada, where they had family. This six-week experience which occurred over seventy years ago was so memorable Rosemary can recall all the details. They boarded the recently refurbished “Empress of Canada” on August 4th  1948.

“We sailed from Liverpool to Quebec and then onwards to Montreal. The final part of the journey was by train. I remember a passenger boarding the train with a musical instrument. Sometime later the whole coach was singing, ‘She’ll be coming round the mountain when she comes’ and I thought, ‘They don’t do that in England!’  It was magical. I missed the first week of school but nobody seemed to mind in those days. It was just so interesting and I learned so much I wouldn’t have discovered at school. We visited Stanley Park in Vancouver and I had my photograph taken standing on Prospect Point.”

Then, as now Stanley Park is the place to visit, with its beautiful lake and spacious views. I looked at the photos of Rosemary spread in front of me and was struck by the honesty and openness of the images. The most telling image of the young Rosemary shows her looking out towards the mountainous horizon. This is the essential Rosemary. She faces the world square on, wanting to go beyond the visible, eager to learn, curious about the past and present.

It is an image foretelling the woman she became. Someone for whom learning is magical and who continues to bring her inquiring mind to everything she encounters. 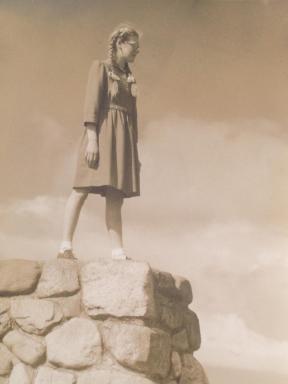 Rosemary at Prospect Park in 1948

One thought on ““It was magical…” Rosemary Gitsham, former Village Recorder of Trimley St. Martin”