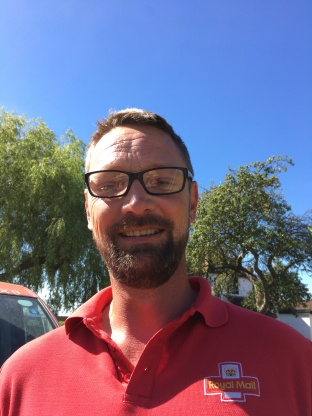 When Rosemary was recalling her childhood in Trimley St. Martin, she mentioned a certain Mr. Walter Hammond who lived with his wife Rosetta at 21 Lower Street, now known as 21 Grimston Lane. Mr. Hammond was born in Whitton but had moved to Trimley by 1911 where he subsequently completed over 30 or 40 years as a Civil Servant in the Post Office. He was part of the landscape of Trimley St. Martin.  His work was both responsible and indispensable; his smart uniform demonstrated his status within the community and the importance of his role. He was styled, “Rural Postman” and his extensive round would have covered a most, if not all of Trimley. Rosemary had smiled kindly when she told me he was proud to recount how he had once seen a Mermaid, although where exactly this fabulous creature was located does not appear to have been recorded. Somehow, I doubt it was in Trimley.

This is not a claim one of St. Martin’s Postmen made when he talked to me about his work and responsibilities. Gary Warren may be the person most of the people in our Parish see more than anyone else, although those on the Post Office side of Howlett Way are currently served by a different Postie. Gary has substantial round, which he covers using a combination of Post Van and his feet, as he has done for much of his 19 years working for Royal Mail. The qualities required to be a postman or postwoman are quite specific, requiring candidates to be personable, trustworthy, polite, smart, reliable and punctual and it is clear Gary has all these requirements to be the  successful Postman he is. Back in 1998, after signing the Official Secrets Act, Gary started his career in Ipswich.  Initially he covered all of his round on foot. In the early days he would start work at 4.30 a.m., requiring him to go to bed at the unfashionable time of 8.30 p.m. Nowadays everything begins at 7.00 a.m. meaning he doesn’t have to go to bed quite so early.  The work on his rural journey requires him to have a van, thereby speeding up the deliveries.   His first task as he swings into action before some of us are even out of bed, starts when he sorts all the mail for his round. After years of practice he swiftly uses racks to arrange the post into the house order in which it will be delivered. Next, loading parcels and mail into his van, he leaves for his first port of call. His round starts with the houses next to the bridge where the road turns towards St. Martin’s School. Then he is off to cover the area up to the crossroads leading to Kirton, before turning around and coming back to deliver post along the long and lonely road called Capel Hall Lane. This underpopulated lane feels as though it has stayed asleep for a hundred years; the view from Capel Hall with its distant views of the Deben has a timeless, mesmerising quality but it is doubtful if Gary ever has time to stop and muse about its ancient history. He is back in the van heading towards the High Road, where he delivers the morning post before proceeding to the houses near and around Seamark Nunn. Then on to Morston Hall and the far-flung Hill House Cottages, with their glimpses of the Orwell. Turning around he heads back for Grimston and Thorpe Lanes, both offering similarly enticing views of the river, which at this time of year are framed by fields of Barley. Back he goes to Mill Lane and the roads leading off from it, finally finishing in Cavendish Road, with all the mail and parcels securely delivered to their recipients.

You may think this is straightforward. Work is done and dusted and Bob’s your Uncle. Well, it isn’t quite as straightforward as it sounds. He has to negotiate all shades of weather: rain; sun; wind; hail and snow are part of his working conditions. All are handled with calm equanimity. Fortunately, Royal Mail are particularly diligent in their distribution of uniform to cover all meteorological eventualities. Shorts for hot weather, Weatherproof wear for rain and shoes with spikes for icy conditions are all supplied for the comfort of the staff. However, even spiked shoes were not very helpful when we had the last fall of heavy snow in March. Gary told me he was unable to contend with the snow drifts in Thorpe Lane for three or four days, despite his best endeavours. People sometimes say to him it must be a lovely job in the Summer,

I can only agree with him as it sounds more like an Army Assault course test than a postal round and one I am confident I would fail after three metres. We are deceived by the effortless appearance he presents to the world.

You may think one of the perils of being a Postie is dealing with Dogs and whilst this may be true for others, it turns out Gary has an affinity with the canine population. He has only been bitten once in nineteen years and his problem, if such it is, rests in the boundless and bounding affection most dogs have for him. He spoke of some of those he meets or has met in the course of his work. Tilly, who first knew him as a puppy, remained affectionate towards him until her untimely early death, aged 7.

“Patch will wait for me and looks up the road until he sees me. He used to jump into my van, wanting to be taken on the journey. There was another dog, Crystal, at Grimston Hall Cottages, who would spot me from across the field and bound all the way to say ’hello’. I had loads of dogs when I was a child.”

Perhaps his huge popularity with this section of the animal community may rest in the good experiences he had in his early life.

One of the many good qualities about Gary is that he brings a high degree of professionalism to his work and I believe this is true of his colleagues as well. He completes his round by running up and down countless drives at breath taking speed. I interviewed him very shortly after he had returned to work after a knee operation, when he was off work for eight weeks. It was due to an old sporting injury he incurred when playing football. Did it stop him in his speedy and spirited delivery of the Royal Mail? Of course not. Watching him sprinting between van and letter box it is clear Gary’s athleticism is indisputable: one of his off-duty pastimes is cycling, which must also contribute to his well-being. If ever Royal Mail choose to organise a Posties’ Triathlon, with the three classes being Van driving, cycling and running, my money would be on him to win it hands and feet down leaving all the competition far behind. I find myself wondering if the respected and respectable Mr. Hammond could have matched him for speed.

It may be that one of Gary’s best characteristics, not included in his job description and for which many of us have cause to be grateful, are his sharp observational skills, his kindness and compassion.  One resident told me he had noticed her front door was unlocked when she went was away on an extended holiday. He found a way of contacting and informing her so she was able to ask her daughter to check it out and make it secure. I have cause to be very grateful to him for rescuing my mother when she fell over. He managed to arrange an ambulance and ensured she was comfortable until rescue arrived. Such diligence and care contribute to the trust and confidence his public place in him. As his partner Kate quietly observed when I interviewed him,

“Gary goes over and above what is expected of him.”

And I can only agree with her. In the absence of any Triathlon win I think you may join me in believing he deserves a Gold Medal decorated with a First Class Stamp for his first class service.