Sometime in January 2021, during the early days of our third National Lockdown, I found myself consulting one of Ray Howlett’s[1] books. I was struck by the date of the publication; 1984. Not because of any Orwellian reference but because it occurred to me it is nearly thirty years since it was first published. Ray Howlett wrote not only about the history of Trimley but also produced reminiscences about the days of his childhood and youth.  Reflecting on this, I realised my own childhood in Trimley is nearly sixty years ago, approximately the same distance in time as Ray’s writings of his own youth.

During the nineteen sixties the car was not as omnipresent as it is today. In 1964, at the responsible age of eleven, the stand out red buses of Eastern Counties became part of my daily life. I was dependent upon the 201 to carry me to and from School. During term time, for seven long years I stood outside the Hand in Hand with my satchel and, to misappropriate Shakespeare, my …

glumly awaiting the 201 bus from Ipswich to Felixstowe. The bus stop facing  open fields was my departure point. A earlier, smaller ‘Hand in Hand’ was behind the passengers with an orchard alongside.  A wooden post and metal bar fence contained the gravelled car park. Both orchard and fence have long given way to the small housing development of High Hall Close.

My pre-decimalisation bus fare cost 4d.  Disembarking in the town centre cost more and therefore I always alighted at Exeter Road. (“You can walk.” my mother would say dismissively.) Coming home, I was hopped of at the Bus Stop close to the Hand, opposite the small row of Terraced cottages, which still stand. It’s is still just about upright but is as dejected a sight as you may ever see. However, Its’ days are numbered, as the advent of a new ‘Poppyfield Green’ housing development in the large field behind it is well underway. At the time there wasn’t a bus stop at the end of Grimston Lane.  Many local residents will remember the 201.  I asked Bryan Frost of Trimley St. Mary, the expert in all matters of transport, for his reminiscences. He reminded me the 201 became the 251 in 1972 before expanding upon the brief I gave him.  He took the opportunity to  describe some of the railway changes:  another of his many passions.

Transport in Trimley – reminiscences over the past seventy years.

Although my family did not return to live in this area until 1963, I can just about recall travelling through the Trimley villages from around 1952 onwards, so these somewhat random and impromptu recollections from my memory bank do cover the above period.

During the early 1950s, these journeys were invariably made by train or bus,  the latter form of transport only being used when my parents and grandparents were feeling less short of funds than normal, since the bus was more expensive than the train, and every penny counted in those far off days. This difference was immediately apparent on boarding the very slow steam train at Derby Road, which comprised several ancient carriages, usually packed with day trippers similar to ourselves, and in the summer months it was well-nigh impossible to obtain a seat. The slow progress en route was often delayed further if we endured lengthy waits at both Orwell (closed in 1959) and Trimley stations to allow a train running in the opposite direction to ‘cross’ us in the passing loops as most of the railway was only a single track line.

All this changed overnight in January 1959 when, apart from one memorable return in May 2002, the steam trains were swept away for good, being replaced by modern diesel units.  These possessed the considerable advantage of a superb view of the scenery and track ahead if one was lucky enough to bag a seat in the front coach, and it didn’t take long for me to travel on the line to sample this experience, which it was possible to enjoy for much of the ensuing thirty odd years until a new generation of trains arrived in the early 1990s.

Although the diesel railcars offered distinct improvements over the steam trains which had held sway for over eighty years, they were certainly not new, and it was not until September 2019 that a brand new train arrived at Trimley. This was the first occasion on which new trains operated on the Felixstowe line since it opened in 1877, and with state of the art features such as wi-fi, travel  air conditioning and step free access from station platforms, they make for a very pleasant ride. I look forward to many more journeys on these superb trains once current travel restrictions are removed.

On moving to Falkenham in 1963, I made daily use of the bus service to travel to school in Ipswich, and although our small village was served by a reasonable number of journeys, I was able to obtain a scholar’s season ticket which also enabled me to use the ‘main road’ service 201 to and from Trimley St Martin.   Not only did these buses operate very frequently – at least every 20 minutes during the day – but the bus company usually deployed its newest vehicles on their Felixstowe service, making for a more comfortable ride. The problem of bridging the two mile distance between Falkenham and Trimley was solved by the use of another form of transport – a bicycle! Now at that time, an enterprising family who lived at the corner of High Road and Kirton Road (near to where St Martin’s Green leads off High Road nowadays) had the idea of making their large shed available as a cycle storage facility, where cycles could be deposited in a secure shelter for the princely sum of 2d (less than 1p) per day! This arrangement was advertised only by word of mouth, but it was most welcome for those living in Kirton, Falkenham and as far afield as Newbourne to deposit their steeds for the working, school or college day.   The number of machines stored there was well into double figures on some days so the facility was much appreciated, and it only fell into disuse in the early 1970s.

These were the days before the construction of the Trimley/Walton bypass in 1972, which severed Kirton Road into two sections, linked by the footbridge over the A14.  The bypass was sorely needed, as by the early 1970s heavy traffic to and from the Port of Felixstowe was making life intolerable for residents along High Road.

In order to serve Trimley, the bus company initially needed to route their main road service from the Ipswich direction along the bypass, introducing a stop close to the footbridge. However, this was never an ideal place from which a vehicle could exit, involving  some risk when the driver needed to pull out amongst very fast moving traffic and it was a huge benefit when the Trimley- Levington link road was opened in the late 1990s, allowing buses from Ipswich to serve the stops between Goslings and Old Kirton Road once again.

During the 1960s, and no doubt from time immemorial, by 8.30 a.m. most mornings, I recall that a vast gaggle of students would form outside the Hand in Hand to await the double decker which would convey them to their places of study in Felixstowe. When the bypass was opened, the bus company coped with the enforced removal of buses from this stop by operating a number of journeys on a circuitous diversion off the Howlett Way roundabout, along Old Kirton Road, Mill Lane and back along High Road in order to serve the busy Hand in Hand stop.  Needless to say, this diversion did not curry much favour amongst the majority of passengers, and these journeys gradually reduced in frequency over the years.

Although the bus company allocated its newer vehicles to the Felixstowe route, the buses which ply through Trimley nowadays are more user friendly and accessible as they have step-free floors, wheelchair spaces and other aids for those with disabilities. Nevertheless, it is intriguing to note that had you moved away from this area in the early 1950s, on returning some sixty years later you could find that your bus would depart from Ipswich’s Old Cattle Market bus station at exactly the same times as it did all those years ago. Plus ca change! 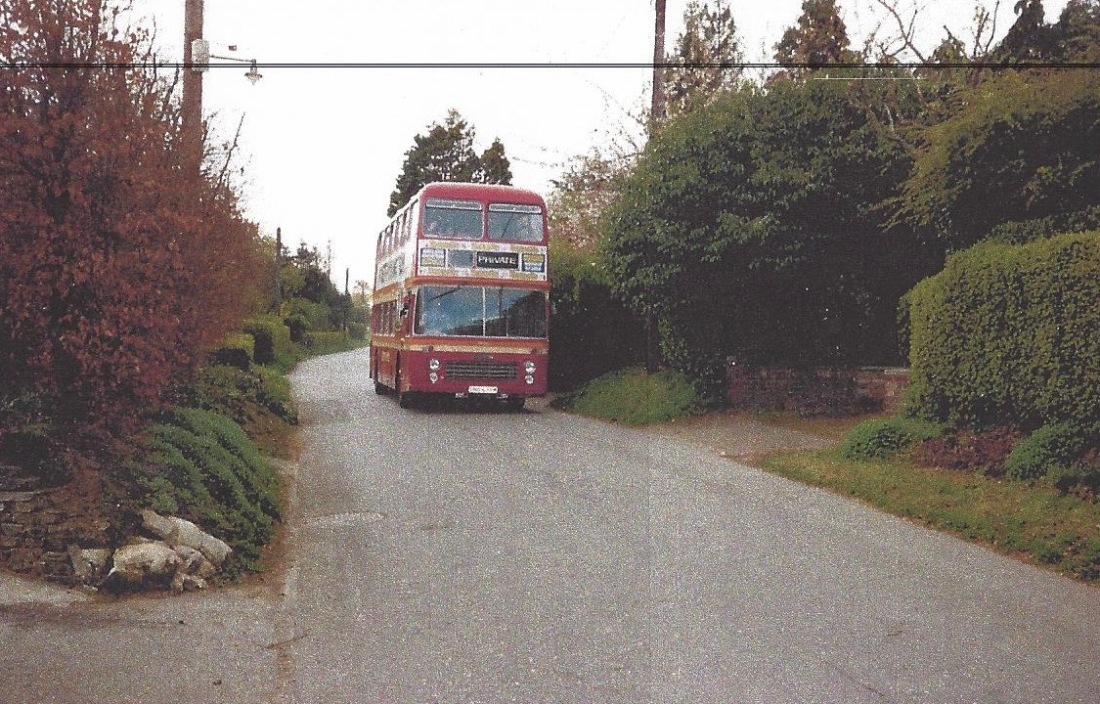 The one occasion when double decker buses ran down Cordy’s Lane. This happened by mistake at Easter 1990, when drivers on the rail replacement services used Cordy’s Lane to turn around rather than the station approach road!

It was Trimley Carnival day, 11 July 1981, and the Felixstowe open top bus was pressed into service as a float. This was one of only seven of this type of bus ever built. Note that in those days the Carnival procession went in the opposite direction to nowadays, finishing up on St Mary’s School field.

And then there is  the only time when a steam train returned to Trimley since diesels took over in 1959, as mentioned in the text. The  date wass 5 May 2002.

An experimental light vehicle, known as LEV, was trialled in East Anglia in 1980. This is the only trip it made to Felixstowe on 1 November 1980. It was not a success!

My thanks go to Bryan for his contribution and unbeatable expertise.

If you would like to be part of the Trimley St. Martin Village Recorder’s project, please contact me at:

[i]  As you like it. Shakespeare. Act II Scene VII

Pondering something every day