To object: 1) to feel or express opposition, dislike or disapproval  2) a reason for doing something, or the result you wish to achieve by doing it.

Tonight, Thursday 3rd January 2019 between 6.30 p.m. and 7.30 p.m. a sizeable group of people made their way to the offices of Suffolk Coastal District Council in Melton, where Councillors were meeting to discuss and approve, or otherwise, the Draft Local Plan for our area. Shadowy figures could be seen negotiating the Council’s Car Park as they made their way to the front of the building where small groups of one or two people greeted each other in comradeship and solidarity. They had come from all parts of the Felixstowe peninsula; Kirton, Falkenham, the Trimleys, Felixstowe and Walton. We didn’t necessarily know each other’s point of origin but we did know why we were there, with one shared purpose in mind: to register our disapproval, disagreement and complete opposition to the proposals contained in the Plan. By gathering together on behalf of ourselves and others we hoped inform the Councillors we wish the Plan to be rejected. Our expression of protest was firm but orderly, quiet and good humoured. There was no heckling of councillors, just polite greetings of, “Good Evening, Councillor”.

Kirton and Trimley Action Group were to the fore, organising the dispensation of posters and placards.  Some people made an early entrance into the building to view the discussion. Others waited until the Action Group leader, Stephen Wrinch had been interviewed by the Press and photographs had been taken. And then, in the spirit of a shared cause, we entered the building and made our way upstairs. By this time the Council Chamber was well stocked with Councillors and members of the public. The main room was limited to fifty observers. It was quickly filled and an Official directed another twenty five people to an adjacent room where proceedings could be viewed via a video link. But there were too many of us and not everyone could be accommodated. The remaining people hovered around the landing area, trying to peer through the glass window. I suppose there were about a dozen of us by this time, some of whom were late arrivals.  I fell into a conversation with a comparatively new resident to Trimley. He explained he had arrived in Trimley via Wapping, Basildon and Tiptree and he is immersing himself in many plusses of village life. He doesn’t want to see housing and industrial building covering the fields of Trimley as he knows what it is to live in a ‘village’ of ten thousand people.  Another man, a   Melton resident, was there on behalf of his late father who was from Trimley and who would have vigorously opposed the plans.

Of course, there are people who have a different view and want the proposed housing for very valid reasons; perhaps they were in the audience. I don’t know because I wasn’t in either the main chamber or the overspill room. I was on the landing outside. But those of us objecting were all there because we value our village and its rural character. Of course, it shouldn’t be preserved in stasis. Every community has to grow to thrive. But sensitive planning and development, considering the views of everyone should be a necessity.  For everyone objecting in Suffolk Coastal’s offices tonight, an invisible ten stood behind them in a silent Chorus rejecting the Plan on offer.

And we will continue to object to the unmodified plans on offer.

Some of the Objectors waiting for admission to the Council Chamber. 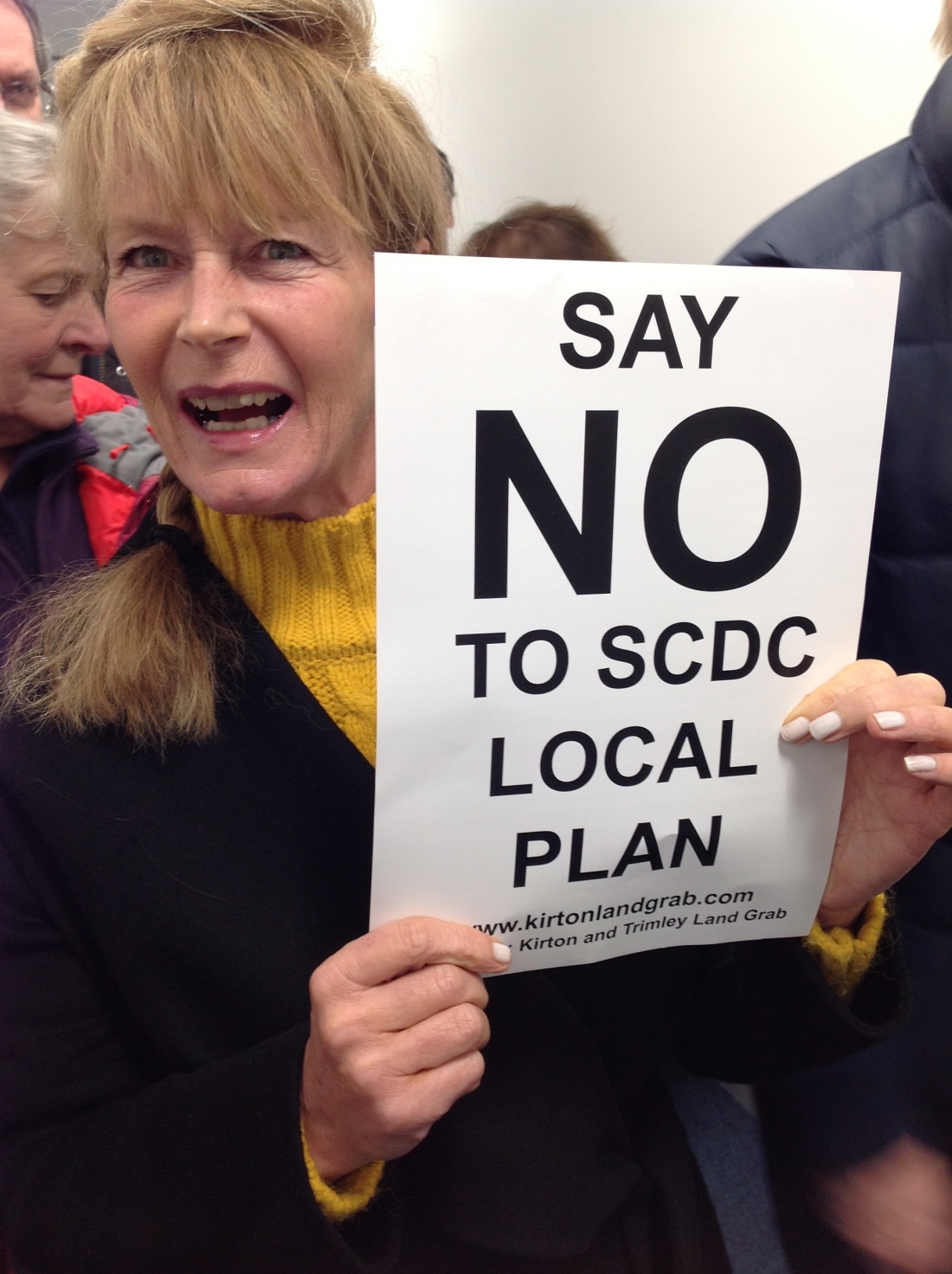 A good humoured Objector waiting for admission to the Council Chambers