“The church is situated in the same churchyard with that of Trimley St. Mary, and contains a mausoleum for the family of Sir John Barker, Bart.: the walls of the burial-ground were repaired with the stones of Felixstow Castle and priory.”

Extract from, “A Topographical Dictionary of England”    Samuel Lewis.  1848

This  article was written early in October, prior to the Cascade of Poppies being placed in position and is a report on the preparation for the main event.

At the start of October we all basked in a balmy Indian Summer. There was just one small hiccup on Saturday 6th October, the day scheduled for the climb to the top of the Tower: it was a drab and mizzly day.    However, despite the dull, misty weather, spirits remained undiminished as a small working party plus myself assembled at the church prior to the ascent of The Tower. Equipped with ropes and other serious equipment, work commenced on two fronts. Firstly, the ladders were put in place to enable the climbers to reach the top: access is entirely dependent on the three sets of ladders, as there are no stairs. I should add the ropes were for the equipment, not the Ascendees. Secondly, the Ground Team went outside with the netting for the Cascade, stretching it out to its’ full length and breadth, whilst those left in the church, including myself started to climb into the internal face of the tower.

Andrew King, Churchwarden, surveys the position of the second ladder

One aspect of the tower I had never considered was the non-existence of any interior finish to the brickwork. As I inched my way along the Bell wheel, a passing glimpse suggested it was crude and more or less entirely lacking in any refinement.  Not that there was much time to apply twenty first century criteria to the building work. It was both eyes skyward and absolutely no looking down as far as I was concerned. All my efforts were concentrated on carefully gripping the sides of the ladder and thinking how to gingerly squeeze myself through three trapdoors without suffering any loss of purchase. I was however, completely prepared to surrender any attempts at dignity and on the latter front, I’m happy to inform you I succeeded.

The Bell Wheel inside the Tower

Finally, after what seemed like half an hour but was probably no more than ten minutes at most, my head popped through the final trapdoor and the firm grasp of Geoff propelled me through the gap and on to the asphalted roof. Andrew was busy with the technical aspects of the occasion, joining and knotting ropes together. Even though I was still inelegantly on my hands and knees, I looked around me, impressed by the scene beyond the parapets. I stood up to cautiously survey the landscape. Even with the outlying mist obscuring the River Orwell and most of the Docks, the scene had all the charm of novelty and familiarity at one and the same time.

Immediately below us stood the heart of old Trimley mainly clustering around today’s Post office as it has done for several hundred years, even before such a service was invented. Several impressions struck me as I carefully rotated 360°, slowly absorbing the view. Firstly, the bulk of St. Mary’s more or less completely blots out the High Road to Felixstowe. It proved impossible to see beyond the Welcome Hall, although the Gate Houses at the end of Gaymer’s Lane could be seen faintly in the distances as could the two hundred and ten feet Trimley Water Tower. Secondly, as the mist obscured the far distance and foreshortened the horizon, the village appeared to be surrounded by complete  woodland which blended together as I looked into the distance towards Kirton. The same was also noticeable across the quiet Churchyard where nothing could be seen but trees and the distant Water Tower. Naively, I had no idea just how many trees continue to grace our village. It’s not at all obvious from ground level where they appear well spread out and disconnected.  Thirdly, change announced itself in the distance. Work on the railway was just discernible as some walkers crossed the fields to be turned back by the impromptu metal fencing which had recently appeared, courtesy of the Civil engineers, Volker Fitzpatrick. Intimations of further change announced themselves. The size of the land earmarked for housing, adjacent to Howlett Way and behind Reeve Lodge sits awaiting a filling of houses and other buildings. From an elevated position, actuality is writ larger than the paper plan version.

Around me, the Workers were about to experiment hoisting the netting for the Cascade so they could check the feasibility of the project. It was time for me to remove myself from the proceedings and to exit the roof.  Under the supervision of Duncan and Andrew, I started the slow descent downwards. In the time it took to reach ground level, the West Front of the Church had been covered with the netting. The experiment was successful and they are now ready to move to the next and final stage of the commemoration. People across the two villages have been busy knitting several thousand poppies and these will be added to the net’s infrastructure before it’s finally placed in position on the Tower. It will remain in situ between 27th October and 27th November, I believe.   There will be various activities surrounding the Armistice Commemorations this year, including the Annual Remembrance Day Service on 11th November at St. Martin’s Church.

Below you may see some of the views from the top of the Tower.  Needless to say, my hearty thanks go to Andrew King for arranging this for me. It was a memorable excursion.

The view from the Tower 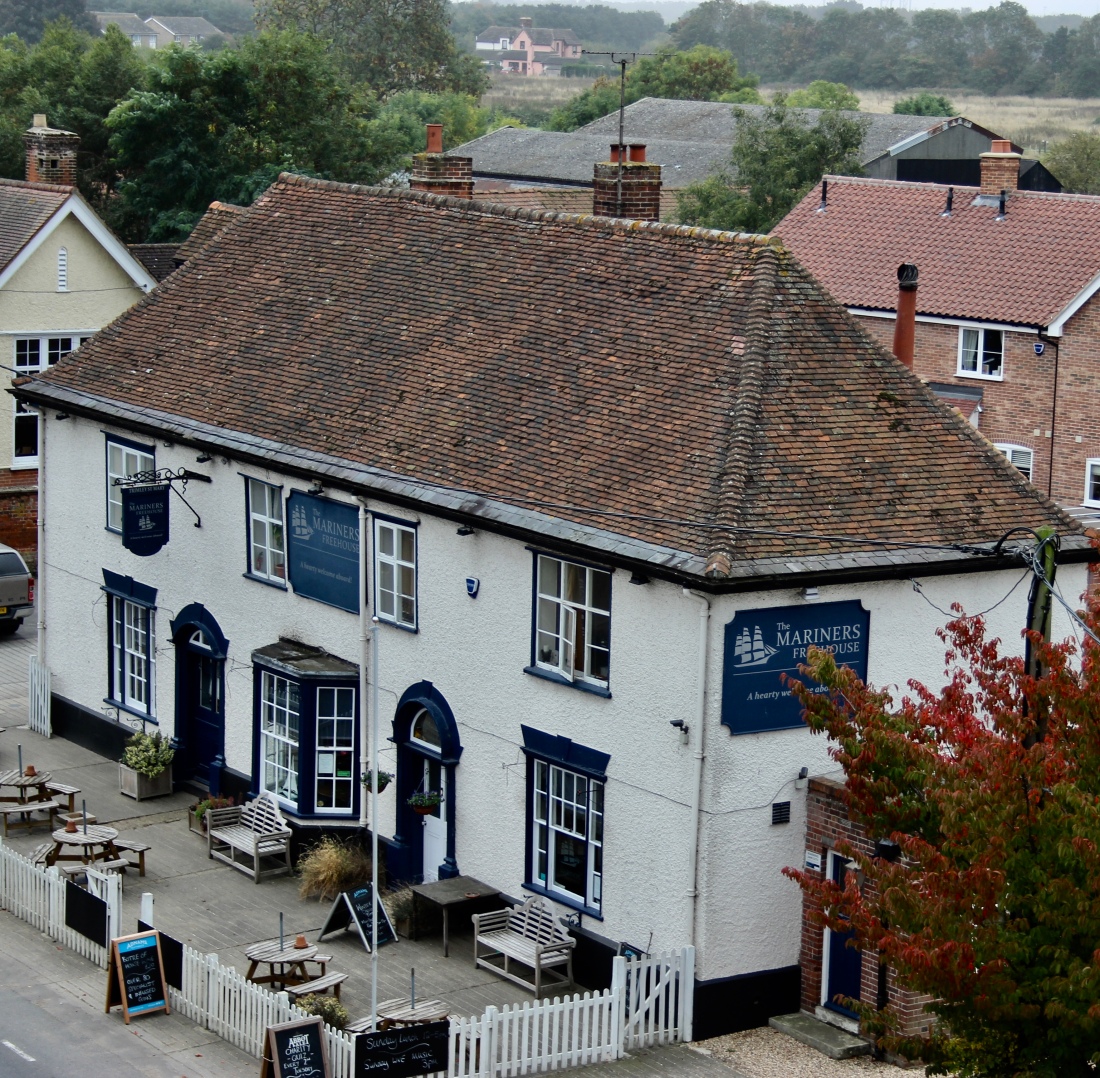 The view across the allotments towards the railway line. 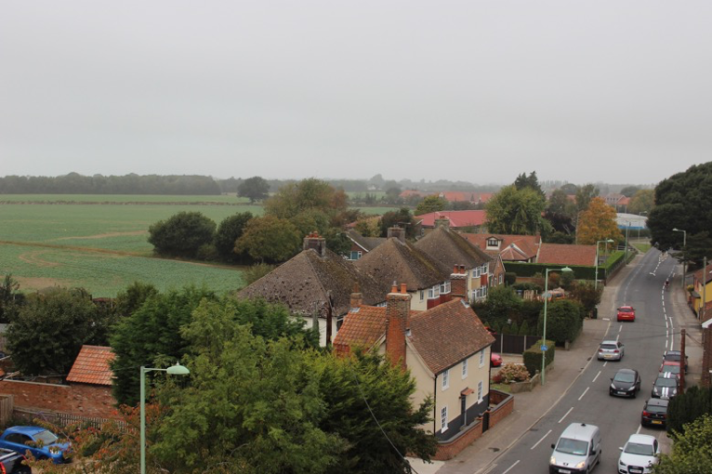 The faint white buildings on the far horizon are the Gate Houses on Grimston Lane. 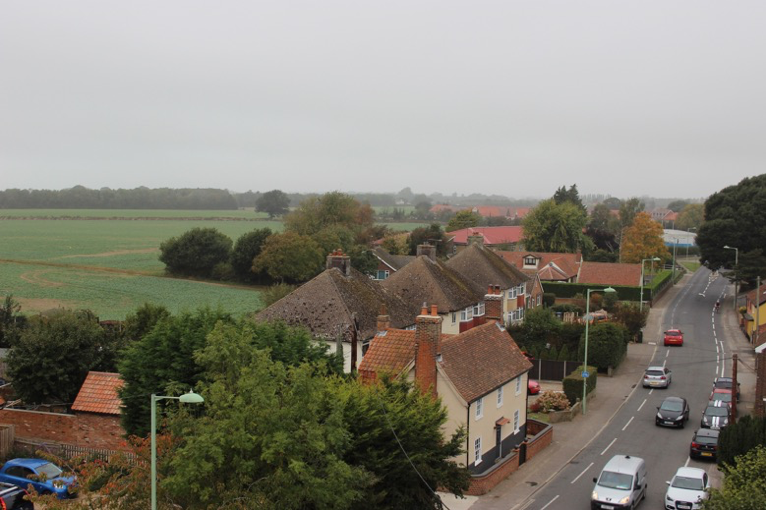 Looking towards the bright red roof of Reeve Lodge and the land behind it. 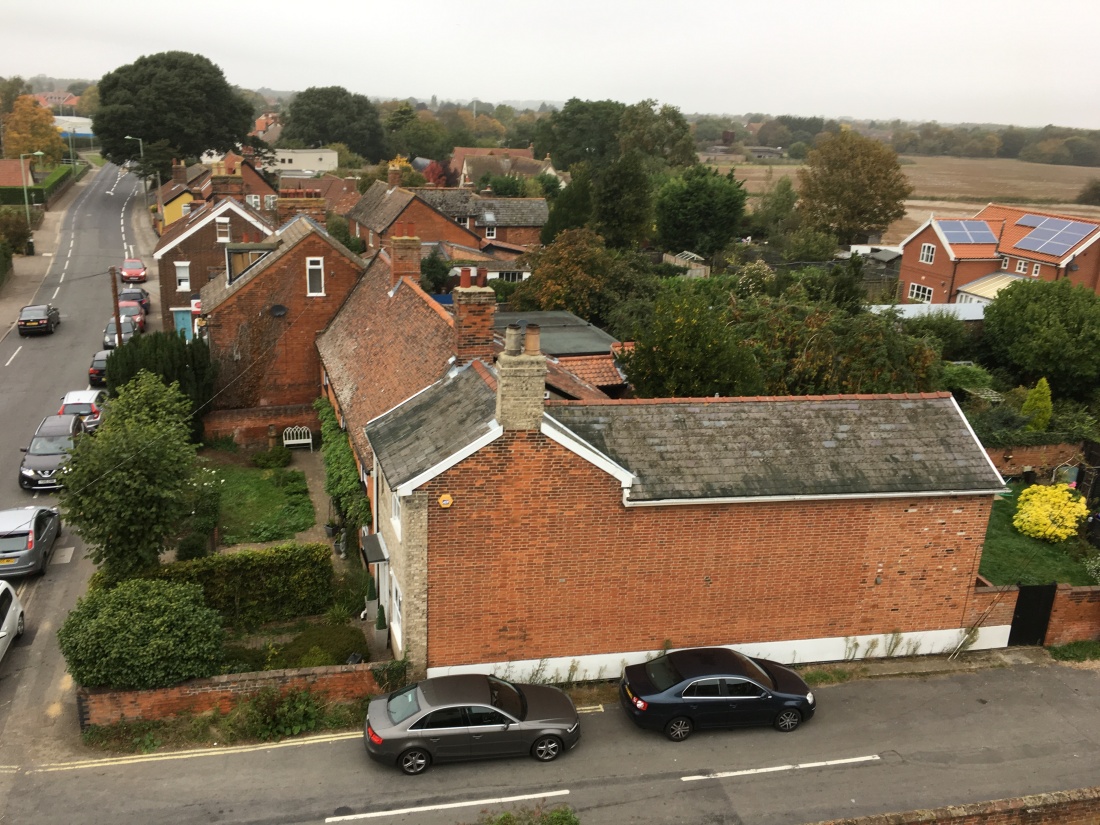 Church Lane. The roof of the old Rectory is visible between the trees at the top left

The Churchyard with the Water Tower in the distance 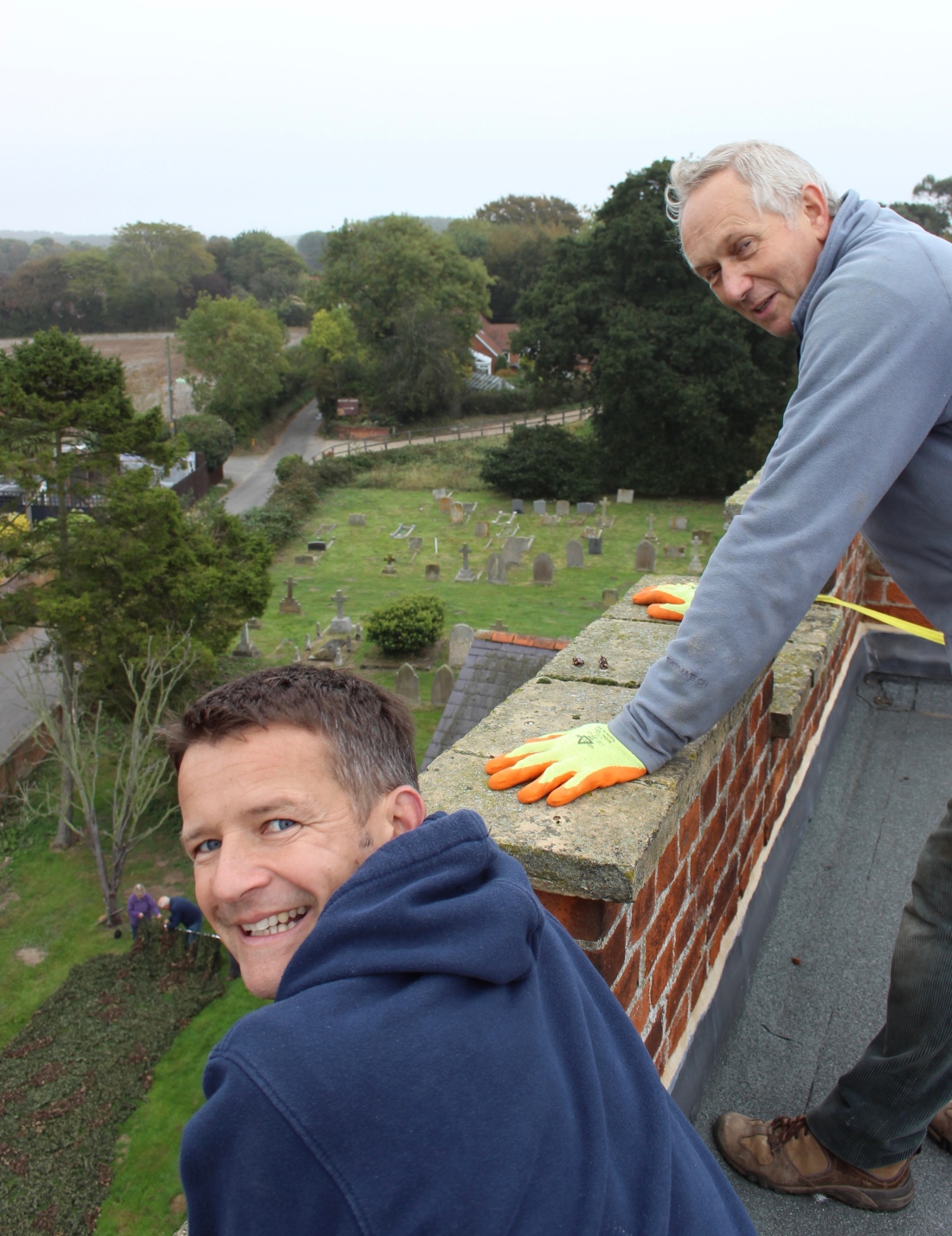 Duncan and Geoff helping to install the netting.

The Working Party view their work

If you have any comments or would like to be part of this Trimley St. Martin project, please contact me at: